As socialists we demand the decommodification and democratization of education, and we fight to:

Empower a Democratically Elected School Board

Elected School Board
Democracy is at the heart of our socialism, without a strong democracy and free and fair elections, the working classes cannot control their destiny in our city. Chicago is the only school district in Illinois that doesn’t have an elected school board; Chicago’s Board of Education is picked entirely by the mayor, with no input or oversight from the city council, teachers, students or parents. This has had disastrous consequences for our schools: 50 schools closed in poor and working class neighborhoods, all but one black and latinx majority schools, an unprecedented charter school expansion, slashing funding in schools for both instruction and social services to help poor and marginalized children, and the near total abandonment of special education services in all of Chicago’s public schools. And because the board is unelected, these actions were led and overseen by corporate CEOs, hedge fund operators and investment bankers, many of whom don’t even live in Chicago. Chicago is on the precipice of having a 100% elected school board, but Rahm Emanuel and his partners on the city council and in CPS have worked hand in hand with the state Senate to block the legislation to change this. Electing socialists to the city council is crucial if working class voters are going to be able to elect their own school board, because sitting aldermen have the power to push this issue, both in Chicago and in Springfield. State senators need to know that voters in Chicago WANT an elected school board, and that we’ve elected people to public office to make that happen.

No More Charters
A socialist vision of universal public education demands that all children have full and equal access to high-quality, fully funded neighborhood public schools that are open to everyone and staffed by unionized public employees. Charter schools represent an existential threat to the very idea of public education, and electing socialists to the Chicago city council means that we need a moratorium on new charter schools in Chicago. Charter schools rarely deliver the benefits the claim to offer – better choices for students, innovative education techniques for teachers and students, better outcomes for communities. In fact, as we’ve seen with the recent teacher strikes at charters in Chicago, the for-profit corporations that often run them tend to withhold funding from teachers and classrooms to pay high executive salaries and bonuses, and to make bond payments on loans taken out with taxpayer credit. Charter schools are often used to justify closing neighborhood public schools and diverting that funding away from neighborhoods that need strong public schools to private corporate charter operators. And they’re frequently non-union, hiring inexperienced teachers that lack the same professional qualifications that public schools require and paying their staff far less than their their unionized public school counterparts. And charter schools often don’t serve all students – to even get in to a charter school your parents have to know how to figure out which charter to apply to, fill out and turn in the paperwork by the correct deadline at each school, and then, if you’re accepted, your parents have to make sure you can get there everyday; many charters aren’t located walking distance from the students they serve. And the schools that do accept difficult to educate students are able to set up discipline and testing regimes that force the most vulnerable and difficult to educate students out of the charter system, dumping them back into underfunded CPS schools with insufficient resources to assist those children.

CPS is the third largest school system in the nation, but is the most understaffed in the state of Illinois. In 2016, the average student-to-staff ratio for all Illinois school districts was 11-to-one. At CPS it was more than 16-to-one.

Illinois ranks last in state funding for public education
Illinois is 50th out of 50 in percentage of funding that comes from the state. IL only contributes less than 20% of the money for educating public K-12 students. The national average for states is 45%. So, public schools rely on local taxing bodies to make up the difference, which causes great inequity between poor and rich districts.
Illinois spent 9% less in real terms on general state aid per student this year than it did five years ago.

Illinois education funding is inequitable
Due to chronic state underfunding, high-poverty districts spend much less on education than wealthy districts do. For example, a low-poverty district like Winnetka District 36 spends $19,774 per student, but a high-poverty district like Bartonville District 66 spends $7,451 per student. This is the opposite of what should occur; low-income students need more resources, not fewer. IL has earned an F in funding distribution for 2007-2012, the latest year for which figures are available. IL hasn’t paid even the minimum 2010 per-pupil funding level of $6,119. In FY 2015, it funded its districts at only 87% of state aid.

Illinois’ tax policy is regressive and inadequate
Illinois fails to impose tax responsibility in a manner that corresponds with ability to pay; it has the 5th most regressive state and local tax policy. Instead of a graduated income tax, Illinois is one of only eight states with a flat tax. As a percentage of their income, the bottom 20% in IL pay three times as much – in sales, property and income tax together – as the top 1%. This regressive system also fails to bring in enough revenue to fund services adequately.

Ways to raise revenue for education and other services that are being cut include: 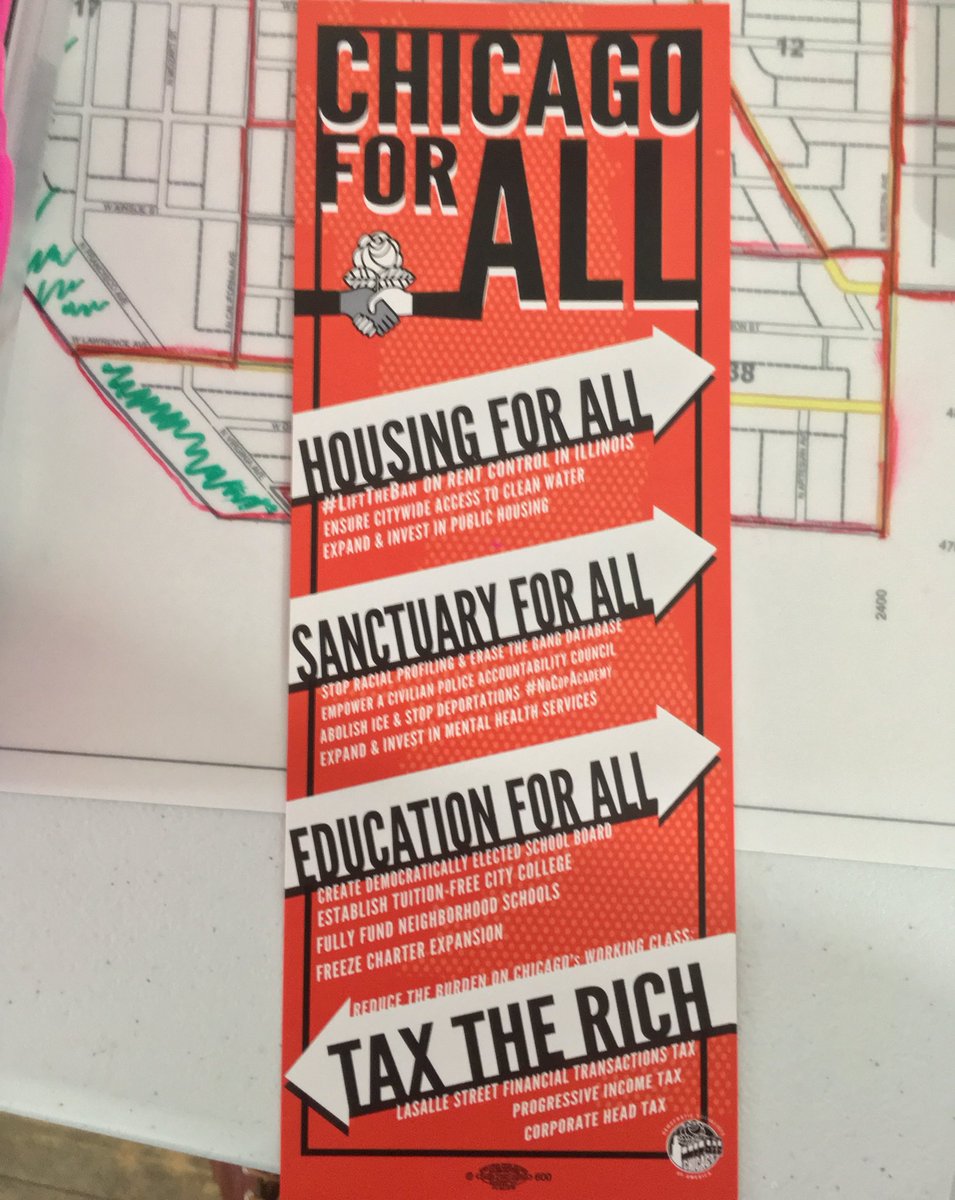 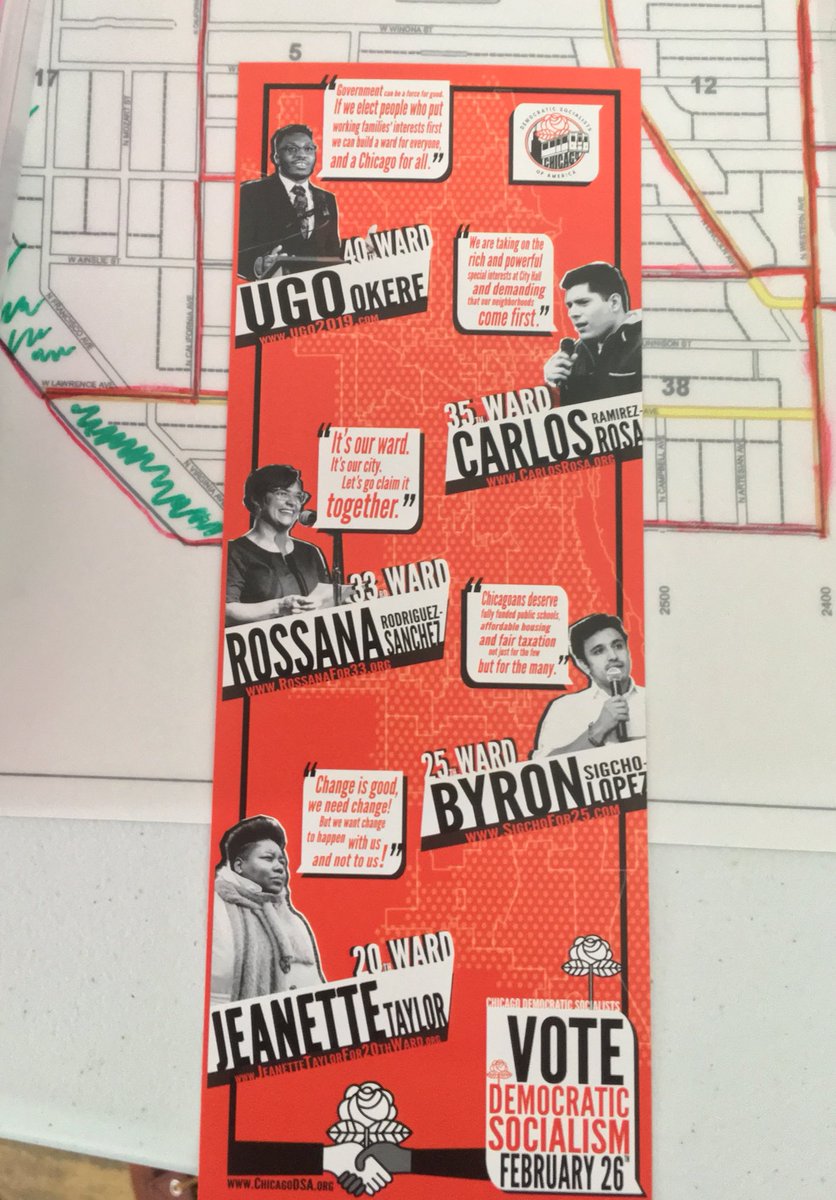 The Chicago For All platform was drafted by CDSA’s Electoral Ad Hoc Committee in collaboration with each of the endorsed campaigns. Special thanks to MIA from the Communications Committee for designing the platform lit that we’ve been distributing across the city on our Day of Actions.

Sign up now to get involved in our campaign to elect a Democratic Socialist Caucus to the Chicago City Council that will push for a #Chicago4ALL instead of one for the few!